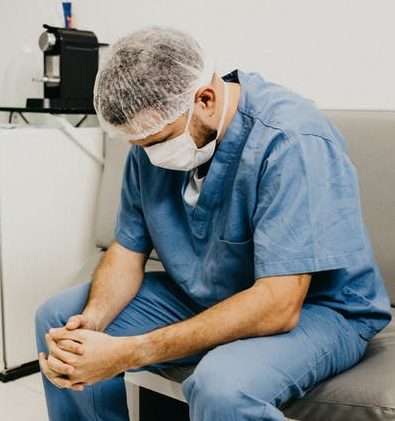 Be Open: Managing Conflict in a Healer

It happened on a rainy Thursday in early May.  I was frustrated from all my emails being ignored.  I was angry at my fat dogs grubby paw-prints on my freshly cleaned floor.  I was anxious I might bring Covid-19 home from the pandemonium at the grocery stores.  Worse still, I might run out of toilet paper.  The stress finally got to me and I snapped at my wife for something so minor, it’s not even worth mentioning here.  I let my internal conflict get the better of my behaviour, and my spouse bore the brunt of that.

Covid-19 brings with it stress and anxiety, the precursors of conflict.  Managing this stress and anxiety is not new; but negotiating the intensity of it in a short period of time is.   Poorly managed, this may result in Negative Conflict and poor behaviour, as my wife so painfully experienced that Thursday in May.  But what if this conflict, internal and external, was so intense that it became regular?  How could someone possibly manage that constant conflict?

In my view, healthcare professionals are subjected to the most intense conflict  amongst all of us during Covid-19.  They not only have to care for sick patients, they have to re-think their practice, change their processes, contribute to Covid-based preparations, and in some instances, acquire their own Personal Protective Equipment (PPE).  And we haven’t even considered the stresses of their personal lives; for instance, insensitive spouses who snap at them for something so minor, it’s not even worth mentioning here.

There was one common conflict shared by some of the doctors and nurses in the Conflict and You workshops conducted by CoreUS that stayed with me. Some of them confessed that they would reluctantly follow the PPE standards or new Covid protocols set by administration even though they were not convinced that it was sufficient for the cause.  They did so for various reasons; they did not want to rock the boat and go against authority; they were too junior to question the reasons; they were concerned that they might not have the same ‘big picture’ view that the decision-makers had.

During the workshops, we discussed managing this conflict by using the Compassionate AccountabilityTM skills, developed by Next-Element.  This conflict needed to be addressed by being vulnerable and transparent; Be Open.  This skill is simply being truthful about  your feelings towards the situation.  By saying “I feel nervous about these standards”, you immediately create a sense of safety and honesty that allows for dialogue to begin.  “I feel conflicted; I don’t want to go against authority but at the same time, I don’t feel comfortable with the protocols”, is another avenue towards addressing this conflict.  “I am afraid that these protocols are not enough to ensure our safety” opens yourself to being understood.  And importantly, these Open statements work as effectively as self-talk!  Read them again.

By being Open, we pave the way for an honest conversation to begin, either within ourselves or with others.  To some, this skill comes naturally, while for others, this will illicit sweaty armpits and nervous stuttering.  But like all skills, the more we practice and use it, the better it gets.  Most importantly, it is a huge step in the right direction to managing conflict.  Try it out, it works.

These brave Healers who protect our frontlines during this pandemic have a lot of their plate.  They have to carry their own burdens as healthcare professionals while having to negotiate with the conflict within, and around, them.  Take care of them, be kind to them.  Remember, if we are feeling some conflict or stress, you can be sure that they are feeling that same conflict and stress…times ten.  Be Open.